The 1210G forwarder’s FT4 engine meets the latest emissions regulations, and has about 7.5% more power and torque compared to the IT4 engine. The better coupling of the powerful diesel engine with the power train results in a clear improvement in performance. 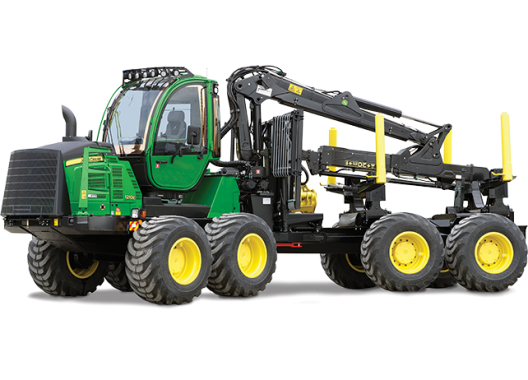 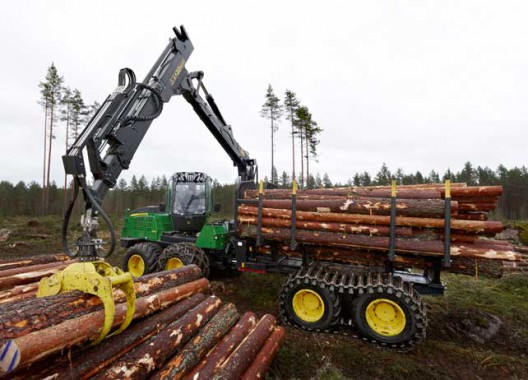 In addition to improved performance, the boom control is more precise. New controllers, simple CAN busses and a streamlined electrical system improve the efficiency of machine functions, decrease malfunction sensitivity and accelerate troubleshooting.
The optional intelligent boom control makes load-handling more efficient and increases productivity by as much as one load per day. In the latest 2.0 version of the intelligent boom control, the precision of the grapple control has been improved, especially in long reaches.
The control system is the renewed TimberMatic F-16. The available JDLink remote control system makes it easy to monitor the machine’s key data on a mobile device or at the office. The machine’s uptime remains high when changes in productivity are shown early on and can be addressed quickly.

A long bogie version of the 1210G forwarder is available for logging on soft terrain. The distance between the front and rear wheel hubs in the rear bogie is longer than in the standard model. The power train and turning radius are the same as with the standard HD portal bogie-equipped machine. The long-bogie solution operates both in normal and soft terrains. The long bogie brings stability when navigating over obstacles in rocky terrain, and the low ground pressure of the machine’s front and rear chassis make the machine an excellent choice for logging in soft terrain.

There are several load space alternatives with different widths for different uses. Variable Load Space (VLS) consists of three special bunks with telescopic stakes that can be extended hydraulically. The headboard moves both horizontally and vertically and extends with the load stakes.